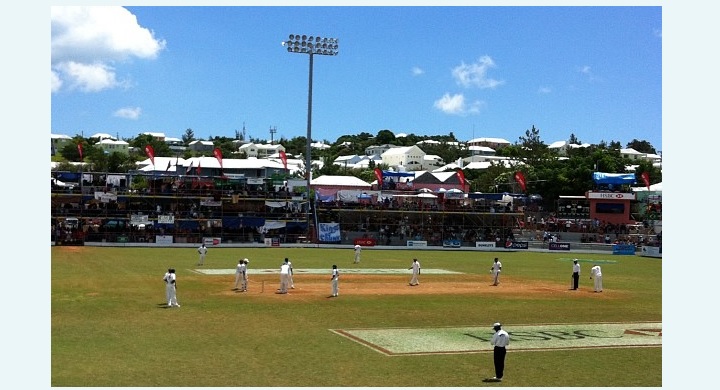 Cup Match 2013 ended in a draw this year. That means that the game could not be finished within the two days of cricket and so Somerset keep the Cup – this year the game stopped early because of some brief rain. Everyone at Thinking of Bermuda is already looking forward to Cup Match 2014.

Cup Match time in Bermuda has always generated an electric feel in the air over its four day weekend. This year will be no different. Come and dance at reggae concerts, party on the water, experience the big cricket game, and have an overall good time.

Cup Match has plenty to do for locals and visitors alike. The holiday consists of four days of parties and entertainment and a two-day cricket game. The Bermuda Department of Tourism has done very well to make sure visitors can easily join in on the action. Such as the visitors’ tents at Cup Match and Beachfest, and a visitors-only cruise to the Non-Mariners Race. Did we mention there is a lot of good food and drinking too? We explain everything you need to know below. 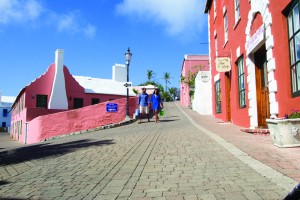 The History of Cup Match

Before we get into the party, a little history lesson. If you come, you will be in Bermuda celebrating a holiday that has been celebrated for one hundred and thirty years. This two day holiday started as a way to celebrate Emancipation Day, when slavery was abolished on August 1st, 1883 in all British colonies. The celebration the next year on August 1st, 1884, to commemorate that day, has been celebrated every year since. Nobody is sure when the annual cricket game started, but it is said to be in the late 1880s or 1890s. The game started with teams playing against each other from the St. George’s and Somerset lodges of the Grand United Order of Oddfellows.

Fast forward to 1902, and the game was made official when the Somerset Cricket Club and St. Georges Cricket Club both put up money for a silver cup and called the game Cup Match. Along with the year-long bragging rights, this silver cup is what each team fights for every year, nothing has changed since 1902. You may hear locals talking about the Cup. You might hear someone say, “Where is the Cup? Exactly! It is at my end of the island right now!” Or you may hear the opposite, “The Cup is coming back to my end of the island this year!” If you really want to sound like a Bermudian, or a seasoned visitor, say these nine magic words, “I really hope it isn’t a draw this year!” Trust us, people won’t question it.

The best cricket players from the western end of the island play against the best players from the eastern end of the island in a two-day cricket game. Held at the St. Georges Cricket Club this year, you will find a visitors tent with complimentary refreshments at the game. Enjoy the free drinks and watch the game from this sectioned off area. Before you leave the grounds though, make sure to head over to the Crown and Anchor tent. 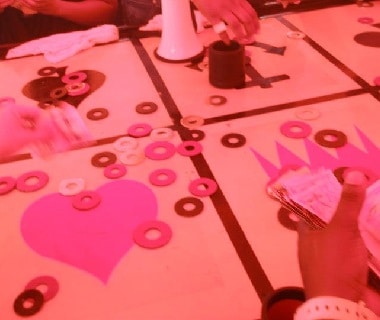 Crown and Anchor is a gambling game that is allowed to be played in Bermuda on only two days of the year. It is a board and dice game where you can gamble on the outcome of three dice. There is a banker who runs the table and rolls the dice. The board has six different types of squares – diamonds, hearts, spades, clubs, a crown, and an anchor. Each side of the dice matches one of the six squares. You put money on whatever square you think will roll on any of the three dice. If one of the dice matches your choice, you double your money. If two dice match up with your choice, you triple your money. If all three dice land on your choice, you guessed it, you quadruple your money. Out of the twenty or so tables, you will see one or two flipped over at the end of the day because someone came, bet big, won, and cleaned out the banker. In good fun, it is customary for the winner to inscribe “Veni, Vidi, Vici” on the bottom of the table after they flip it. Ok, the “Veni, Vidi, Vici” part is not true. We sort of made that up. Come and try your luck though with $5 or try to flip the table. Either way, enjoy yourself.

Update (7.23.13) – The 8th Annual Beachfest Emancipation Celebration has moved their event location to Snorkel Park in Dockyard. $10 entry during the day, $20 entry for anyone arriving past 7:00 pm.

2013 marks the 8th anniversary of this event. Organized by The Chewstick Foundation, it is the largest beach party in Bermuda. It is on the Thursday of Cup Match at Horseshoe Bay and each year, party revelers join in on fun races and classic beach games like tug-o-war, hula hooping, and limbo. In 2012, there was a skate ramp in the middle of the beach and a water slide leading into the surf.

On the beach will be a Visitors’ Tent open from 12:00 noon until 7:00 pm along with a cash bar. There will also be local talent singing on stage throughout the evening. This year a surprise international artist is expected to arrive on stage. The organizers are keeping it a secret for the moment but will be announcing it soon. We can only speculate it will be a good performance since last year we saw internationally known artist Wayne Wonder on that same stage that has held a lot of local talent as well, I-Vibes and Jelani to name a few. You can see that The Chewstick Foundation has made it one of their missions to give local performers and artists an avenue to flourish and show off their talent. Beachfest gives artists that ability to do so year after year. So a big thanks to The Chewstick Foundation and its sponsors. You and the family are sure to enjoy yourselves here. 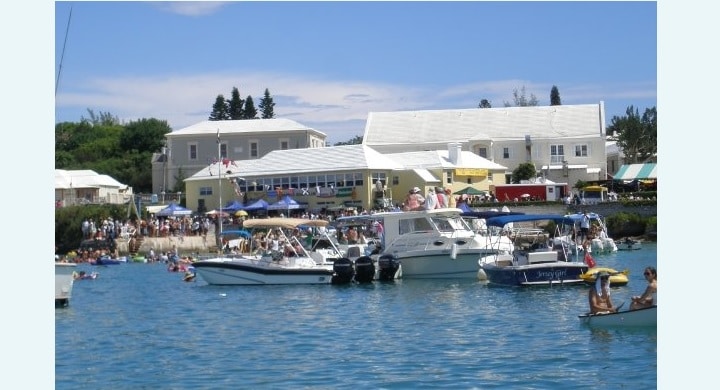 This event takes place on the last of the four days in Mangrove Bay with a lot of people enjoying a large party at the Sandys Boat Club. According to the official website, the festivities will start at 11:58 am and 27 seconds. Smaller events throughout the day leading up to the big race which starts at 3:39 pm. The Non-Mariners Race is basically a race of non-water-crafts that are homemade from anything and everything that floats, and are not allowed to be under motor power. The funny-looking crafts, which tend to have themes that poke fun at politics and recent stories in the local papers at the time, go out and around a buoy in front of the Sandys Boat Club and back to the finish line at the dock. They have to do this while avoiding being sabotaged or sunk by opposing teams in non-battles. Most floats sink before the race is over and it is entertaining to watch it all happen.

There is a smaller race for children called the “non-noodle race”. It takes place at 1:30 pm and any child can enter – as long as they register at the Sandys Boat Club on the Sunday of the event. The boat club will be open at 10 am. Head down to the dock of the boat club if you are interested in having your children join in on the race.

Out in front of Sandys Boat Club is Mangrove Bay and out there you will see hundreds of boats with people partying. The Bermuda Department of Tourism has sponsored a Non-Mariners Cruise to Mangrove Bay free for visitors. There is free lunch on board along with a cash bar. It departs Albuoy’s Point in Hamilton at 11:00 am and an RSVP is necessary to get your spot on board. Space is on a first-come, first-served basis. RSVP as soon as possible with Tashae Thompson by telephone 441 292 0023 or email tcthompson@gov.bm.

Getting to this Unique Bermuda Event in August 2013

If you would like to experience this holiday and need airfare and hotel, there are a few things to factor in. Cup Match is held at opposite ends of the island each year and this year it will be in the east, in St. Georges. Therefore, Rosewood Tucker’s Point, Pink Beach Club & Cottages, Aunt Nea’s Inn at Hillcrest, or The St. Georges Club are a few choices if you would prefer to stay closer to the game. If you would like to look at other options, there are plenty of other hotels and accommodations for you throughout the island.

You can come to Bermuda and see the beaches, caves, and spas, and see the pink sand, coral reef, and shipwrecks. Add Cup Match into your itinerary though, and this will be something you remember. Our Bermuda vacations specialists at Thinking of Bermuda can help organize the best excursions and activities on the island. Call us toll-free 855-777-2038 or send us an email today, to see how we can help. 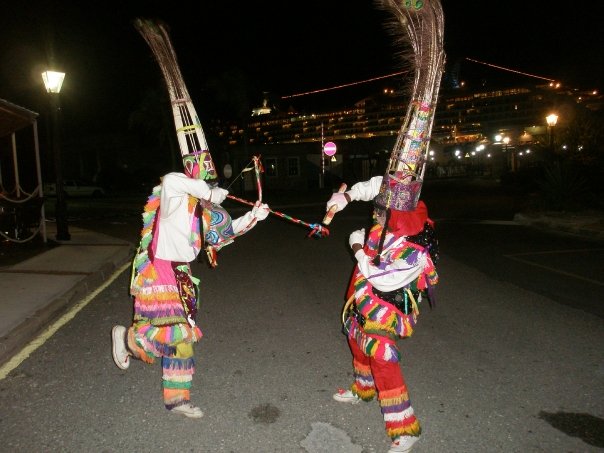